I wanted to buy a nativity scene or a little creche in Italy.

Before we left, I declared my intent to my husband: “What better souvenir?  We’ll be in Italy.  Italy.  At Christmas!  Why not bring home a new nativity that we’ll use for the next several decades?  It’d be perfect.”

As it turns out, I did not, in fact, buy one.  This is mostly because a) home nativity scenes and creches in Italy are profoundly expensive and b) because home nativity scenes and creches in Italy are deeply involved.  I saw tiny, delicate nativities with mechanical moving parts: actual running water, donkeys drinking, sheep walking, Mary swaddling Jesus over and over again with tiny carved hands.  They were all beautiful, they all cost an insane amount, and they were all far too delicate to cram into my suitcase for the trip home.

And yet: those nativity scenes changed the way I think of Christmas.

To help you understand why, I should explain that on our travels in Italy we saw many, many nativity scenes set out in churches and shop windows and public places.  And what my husband and I noticed immediately was that these nativity scenes were huge and sprawling and incredibly elaborate in a way that ours are not.

See, I’m used to American nativities: the baby Jesus, the manger, Mary and Joseph.  At its most elaborate, people add the animals, and sometimes the shepherds and the magi.  But that’s it, really.  That’s as complex as the nativity gets – and it is oftentimes far more simple, with Mary, Jesus, and Joseph considered more than enough in some quarters.  For us, the nativity is a reenactment of a scene long ago: a tiny memorial to an event frozen in time.

Italian nativities are different.  Many of the ones we saw in churches and cathedrals are huge and sprawling.  Yes, you’ll find figurines of Mary and Joseph, and Jesus (though not until Christmas proper) and the shepherds and the animals and the magi.  You are also apt to find little bread-carts, merchants, fish-sellers, butchers, little lakes, waterfalls, palm trees, and children playing.  It’s a bit like the typical American “Christmas village” has been smashed into the nativity, and the effect (for an American) is at times a bit disconcerting: Jesus, angels, Joseph, tiny little delicately-strung hams, shepherds, and merchants all crammed into one place.

When I researched why this was, I learned that long ago nativity-makers (I believe in Naples) were struck with the idea to include traditional markers of Italian daily life in  the scenes: hence the bread-carts and people and and figurines that have no reasonable place in a recreation of Bethlehem so long ago.  The tradition stuck, and over time many families (and churches) add to the nativity with new and more representative figurines.

It made me smile.

I love the idea of smashing the still quiet of the manger together with daily, normal, natural life – how can you not?  The manger, after all, marked the moment when God Himself entered that daily, normal, natural life to take part in it, to transform it, to redeem His people.  As much as we attempt to sanctify it and memorialize it and put it on a pedestal, everything about the night of Christ’s birth was as much human as holy.  A screaming baby.  The mess of afterbirth. Animals and the unmistakable scent of dung. Dirty shepherds popping in.  The inherent chaos and lowliness of it is something we have cleansed out of our recreations of the event, and something about the way Italians insist on smashing the everyday together with the sacred remind me of how much the birth of Christ was the epitome of everything we would come to know about Him: absolute holiness, and absolute humanity.

I feel like it would behoove me, and most of us, to smash together our life with this holy moment in the same way.  Christmas is not, or should not be, a holiday where we read reverent words, and watch stylized scenes, and nod our heads, and then go home feeling as if we have accomplished something.  Christ’s birth was the tremor before the earthquake: the foretelling of profound, redemptive shock.  Christmas is the start of the transformation.  It matters as much now as it ever did, and we do ourselves a disservice by sentimentalizing it, by divorcing ourselves from it, or by relegating it to an honored past. The sooner we see ourselves in it – the sooner we see the scenes of our lives interwoven with the bloody, earthy, reality of the child in the manger who became the man on the cross and the active, transforming agent of our lives and souls, the better off we’ll be.

The header photo for this entry is one that I took through a shop window, hence the glare.  It’s not the best, but I chose it because it illustrates the sort of manger figurines that I mentioned above in the entry!  Along with the “traditional” figures, you can pick out bread, a woman weaving fabric, little bread baskets and a lady selling pasta!  But because I don’t think the header photo shows up properly on the reading page, I am also including it here: 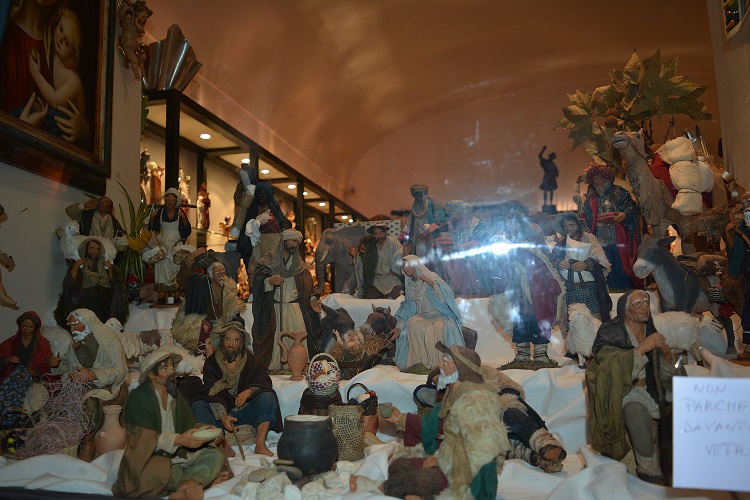 Edit: Madelyn Griffith-Haynie commented on this post mentioning the Christmas tree and Neapolitan Baroque Crèche at the Metropolitan Museum of Art, which is a stunning example of what I’m talking about here.  She has some fantastic links to follow if you want some more examples of the detail and scope of these sorts of nativities; go to her blog here and scroll down to “Awe-inspiring Presepios” to find them!

The Jonathan Study Available For Purchase Now In Kindle And Paperback!!